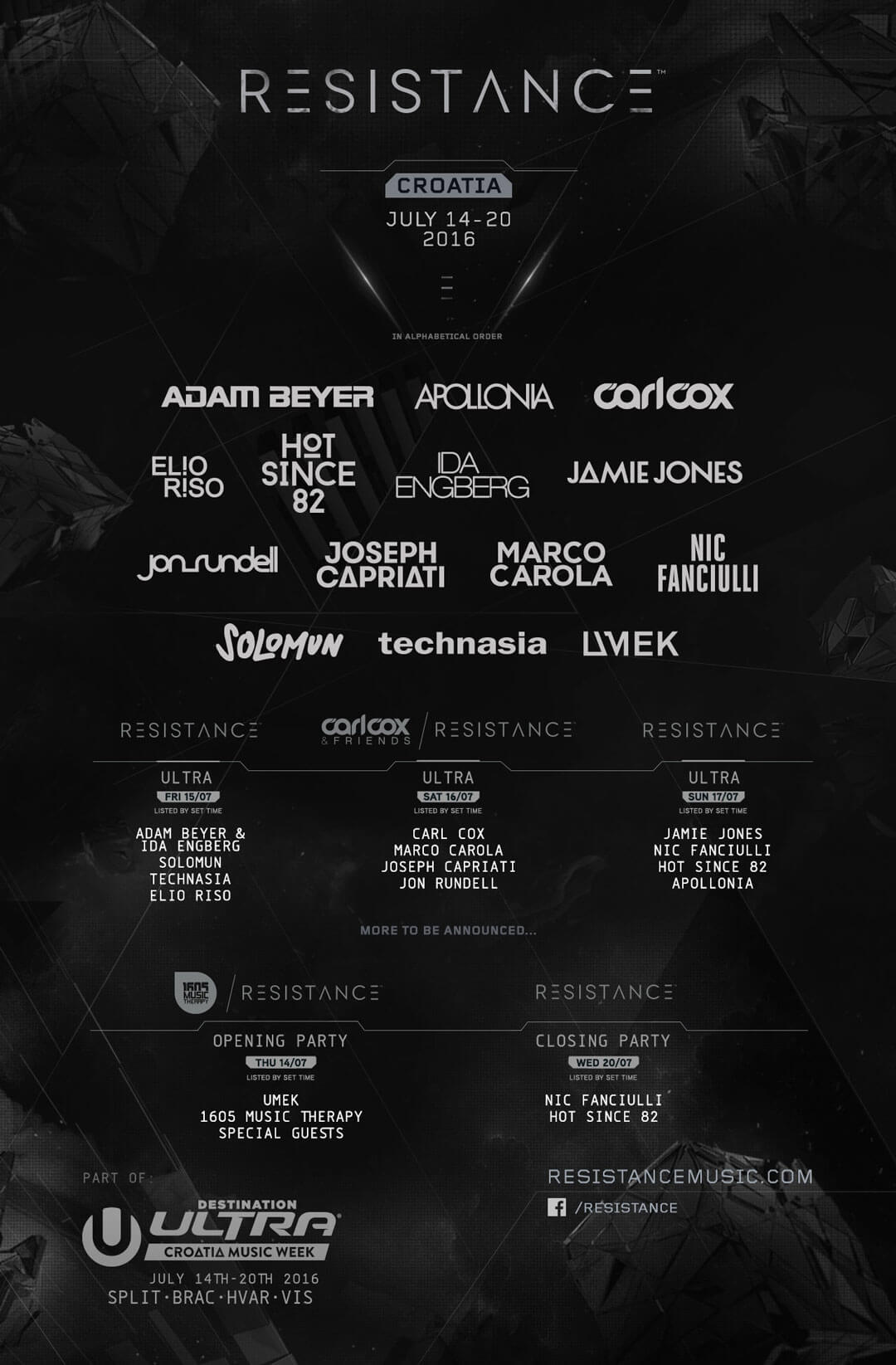 Famed the world over for producing some of the finest house and techno experiences on the planet, RESISTANCE™ has announced its enormous lineup spanning across the five days of Destination ULTRA – Croatia Music Week.

As ULTRA Europe kicks into full swing on Friday, July 15, Swedish techno power couple Adam Beyer & Ida Engberg will headline the upgraded RESISTANCE™ stage along with Diynamic head-honcho Solomun. Other names set to play on the Friday include Parisian maestro Technasia and last but not least, Elio Riso.

Saturday will see RESISTANCE™ hosted by Carl Cox & Friends for the very first time, with the king himself inviting Italian heavyweights Marco Carola and Joseph Capriati to perform, in addition to Intec label mate Jon Rundell.

The final day of ULTRA Europe’s RESISTANCE™ stage, on Sunday, July 17, will be headlined by global superstar and Hot Creations dynamo Jamie Jones, the UK’s Nic Fanciulli and Hot Since 82, plus Parisian trio Apollonia.

Both Nic Fanciulli and Hot Since 82 will also follow up on their sets in Split to play the RESISTANCE™ Closing Party of Destination ULTRA – Croatia Music Week on July 20, leaving partygoers with a final lasting memory of the momentous week.

Tickets for Ultra Europe and Ultra Beach Hvar are now available exclusively from ultraeurope.com/tickets. With early bird tickets sold out for the main event in Split already, fans will have to be quick in snapping up the remaining few at €169, after which, the price will rise to €199. To help with the purchases, ULTRA Europe is now offering a payment plan, where fans can split the total cost across four monthly installments. In a new initiative for 2016, group tickets are also on sale, with those who purchase five tickets at once, receiving a sixth for free! All tickets are available to buy exclusively from ultraeurope.com/tickets.

For those looking to travel to any of the Destination ULTRA events, please visit travel2ultra.com for tips, exclusive packages and much more. Travel2Ultra gives festivalgoers the chance to experience Destination ULTRA in true style, with a host of offers and packages for accommodation, transfers, boat parties and Yacht Week parties on sale for some of the most affordable prices. You can also book your spot at the exclusive Beachville campsite through Travel2Ultra, which hosted over 4,000 Ultranauts in 2015 and is set to welcome back even more in 2016. Check out the official Beachville movie here.

A unique concept pioneered by ULTRA Worldwide in 2015, RESISTANCE™ has fast become known for producing some of the highest quality house and techno experiences around the world.

First witnessed at ULTRA Buenos Aires in February 2015, receiving rapturous responses from fans and critics alike, the concept was then rolled out at the flagship ULTRA Music Festival Miami the very same year. Housed in the awe-inspiring, state-of-the-art ‘Afterburner’ stage, powered by UK production company Arcadia Spectacular, the RESISTANCE™ concept drew huge international attention and recognition in Miami and has since had custom productions on five continents, including a subsequent show with the ‘Afterburner’ at Ultra Europe 2015.

ULTRA Music Festival Miami 2016 saw RESISTANCE™ team up with Arcadia Spectacular once again, this time for the highly anticipated North American debut of the legendary ‘SPIDER’ structure, complete with its own breathtaking ‘Arcadia Landing Show.’ In only its second year, the burgeoning RESISTANCE™ concept continues to expand at breakneck speed, introducing newcomers and avid fans alike to the very finest realms of house, techno and everything in between.